The Pattern Forms - Peel Away The Ivy 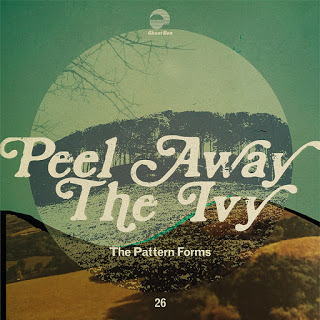 I’m not entirely sure when the decision was made that we would make an album; I don’t think any of us really made any plans past the single, at first. My mind’s a mess of stuff at the best of times, when it comes to what happened, when.

TPF was born out of a longing to create something… different to things that any of us would usually do. Not to abandon what we had all done before, or since, but just to explore new ideas. Putting the single together felt like a new entity taking shape - I remember Ed writing the guide vocal for Fluchtwege very late one night and explaining that it felt really different for him to sing a lot more softly than usual; the arrangement lent itself to that and everything else followed quite naturally.

So, at one point after the single release, we decided to write material for an album. We’d been listening to a ton of different stuff; but all with a sense of the pastoral and an unabashed air of romance and intrigue about it. Through trial and experimentation, we learned what the many elements of the ‘TPF sound’ were and the many (sometimes unlikely) places we found it. Rather than spelling it out here, hopefully you’ll hear it all in the album’s fabric.

I am but one third of our band. I mentioned to Ed a few days ago that I felt that being part of a triangle of sorts helped me to enjoy listening back and feel proud of what we’ve done with all of this, because it doesn’t all rest on my shoulders - only 33.3 percent of it. The magic happens when we all contribute our parts and basically vibe off each other’s input, but it’s hard to pin down how it works. I suppose that’s the very enigma of the best part of writing music with others.

This was really brought home to me when we wrote A Simple Walk. I’d sketched out a rough arrangement of the song and handed it over to Ed and Edd to hear their thoughts. You can never tell what someone’s going to do to a song, or the direction they may take it. Suddenly, we had a vocal and some very evocative textures added and it was interesting for me as someone who usually works on music alone. The final chorus of the song remains my favourite part of the album, because it’s a soaring, in-full-flight picture of three people giving it 110%. The textures that Edd added didn’t quite sound like guitars sometimes; they were unique tones to my ears, and became a staple and constant throughout the writing process, adding an air of mystery and a grounding influence at once.

We mixed the album at my room in January & February. My enduring memory of this is Ed and I listening closely to some fairly tricky moments on certain songs, tweaking things in the arrangements to make them exactly as we wanted, grinning at each other when we got it right… and constantly taking the piss out of each other as we went along. How it should be, I think.